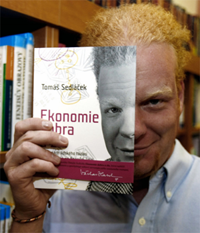 ECONOMICS OF GOOD AND EVIL

The Quest for Economic Meaning from Gilgamesh to Wall Street

In Economics of Good and Evil, Sedlacek radically rethinks his field, challenging our assumptions about the world. Economics is touted as a science, a value-free mathematical inquiry, but Sedlacek sees it as a cultural phenomenon, a product of our civilization. To grasp the beliefs underlying economics, he breaks out of the field’s confines and explores myths, religion, theology, philosophy, psychology, literature, and film, ranging from the epic of Gilgamesh and the Old Testament to Matrix and the consumerism of Fight Club. In his thrilling, postmodern style, he asks searching “meta-economic” questions about the very soul of economics. Deemed by experts as an impressive advance in “humanomics,” Sedlacek places the wisdom of philosophers and poets over strict mathematical models of human behavior. His groundbreaking work promises to change the very way we think of economics and the way we calculate economic value. Read more ...

The Economics of Good and Evil was first published in Czech original as Ekonomie dobra a zla in May 2009 and quickly became a national phenomenon. The book was the first non-fiction piece that has ever topped national annual list of best-selling titles. Since then, for the first time ever, the prize for the best economic book in Germany goes to a foreigner – Tomas Sedlacek, a young provocative thinker from Prague who became a global phenomenon by presenting a simple yet almost heretical proposition: economics is ultimately about good and evil.

Sedlacek (35) won the 2012 Frankfurt Book Fair’s award for his crossover book Economics of Good and Evil. The title was on Der Spiegel’s bestseller list for weeks and became a hot topic in the German press and in the academic world. It topped the list of non-fiction titles in Switzerland and has been, or is being, translated to 14 languages. It was published in the United Kingdom by Oxford University Press (OUP).

Taking an unconventional approach, Sedlacek tackles big economic questions from the perspective of arts, history and philosophy. Handelsblatt, the leading German business newspaper, listed the book among its top 50 most influential economic titles in history. The “Deutscher Wirtschaftsbuchpreis” is awarded by Handelsblatt, the Frankfurt Book Fair, and Goldman Sachs under the motto “Understanding the economy”. New perspectives, innovative presentation of issues, clear language and convincing arguments are the key criteria guiding the jury’s decision. Placing the wisdom of philosophers and poets over strict mathematical models of human behaviour, Sedlacek’s groundbreaking work promises to change the way we calculate economic value.

MORE FROM THE BOOK

The crisis is a phenomenon of growth. We can attain greater order only by walking through the valley of higher chaos and disorder. Have you ever noticed that the best method to re-order a drawer is to overturn its contents and actually create more chaos before instilling better order? That while cleaning up a room you create a bigger mess than was before? That if you are painting a room, it becomes less usable, during the painting itself? It is like that with all our earthly business: We don't know how to increase the level of order in a given system without some temporary disorder first. Before arriving in the promised land, one must first cross a dry desert.
See more quotes from the book and other Sedlacek's texts here.

The Epic of Gilgamesh dates from more than four thousand years ago and is the oldest work of literature available to humankind. The first written records come from Mesopotamia, as do the oldest human relics. The epic served as an inspiration for many stories that followed, which dominate mythology to this day in more or less altered form, whether it is about the motif of the flood or the quest for immortality. Even in this oldest work known to men, however, questions we today consider to be economic play an important role — and if we want to set out on a trail of economic questioning, we can go no deeper into history than this...
Read more from this extract of the book, "Gilgamesh p.19-22".

"The Secret Power of Story, or All Colors of Economics", "The Epic of Gilgamesh: unproductive love and a power of friendship", "Taming of natural evil and the invisible hand", "Joseph, Pharaoh and Bastard Keynesianism", "Adam Smith, Blacksmith of the Economics", "Blasphemous Thoughts", "Double trouble of economics", "The Crises of Good and the Crises of Evil", "The Beautiful Economy". You can read about all these topics, that you can find inside the book, and much more if you take a look to the
abstract and general info here.

ALL EDITIONS OF THE BOOK

The book have been translated into many languages. Take a look and find the one that most suits you!